Protecting the environment is important. Across the world, the effects of climate change are being felt and everything around us is slowly changing. Since the 1950s, the amount of carbon dioxide in our atmosphere has grown drastically. As the number of people living in our world increases, there are more demands for energy supplies, food and space.

Our blog at NP Solar looks into the impact of climate change, what is being done and how floating solar could make a dramatic impact.

Escaping facts about the environment is hard to do and we’ve all read about how global warming is impacting us. Knowing about the facts puts this into perspective and shows us why we need to do more to protect the world around us.

The hottest year on record so far was 2016 according to data NOAA and NASA. Of the 12 months in that year, 8 were the warmest months recorded so far. On top of this, 17 of the 18 hottest years on record have happened since 2000.

There has also been a decrease in snow cover in the past 5 decades along with a retreat in our glaciers. It is estimated that oceans have absorbed a large amount of the increase in heat, warming up 0.4 degrees in the previous 50 years. 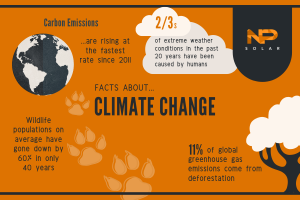 So far, only four countries in the world have declared a climate emergency. This includes the UK, France, Canada as well as Ireland. Our own country was the first to formally say that climate change was an emergency and since then has been taking steps towards change.

Last week it was announced that the UK citizens’ assembly on climate emergency will happen in Autumn this year. This follows the Prime Minister’s declaration in May and shows a step towards reducing carbon emissions and protecting the environment. Additionally, 2050 was marked as the date to end greenhouse gas emissions.

Ireland has also revealed plans to cut their emissions and are to set 2050 as their target year. Leo Varadkar, the Taoiseach, said:

“We are going to change how electricity is produced and consumed, how our homes and workplaces are heated; the way we travel; the types of vehicles we purchase, and how food is produced. Above all, we are going to decouple emissions growth from economic growth… This plan represents the sum of our hopes for the future.”

How Floating Solar Can Help

The IPCC (Intergovernmental Panel on Climate Change) recently released a report outlining what countries around the world need to do. Overall, the target for the globe is to have net zero emissions by 2050. However, by 2030 they expect CO2 emissions to be reduced to 45% of the levels that were recorded in 2010. Other targets outlined include a complete reduction in coal use.

One of the largest comments was on how electricity is to be generated and provided across the world. The IPCC has said that renewable energy must account for 85% of all electric provided. This means that major changes need to be made in how people create power.

In the past few years, floating solar has seen a sharp rise in popularity. It strikes a perfect balance between conservation of land and environment, using water bodies to house floating solar panels. As more than 70% of the surface of the earth is water, there is endless potential for improvements. So far countries including the UK, Taiwan, China and the USA have started the use floating solar farms to generate electricity.

Although, it seems there is more to solar farms than just electricity production. Bruce Patterson, a physicist at the University of Zurich, released a paper at the start of June on the potential impact of floating solar farms. He recommended that clusters of 70 panels or ‘islands’ covering 0.4 square miles could produce electricity to help split water molecules. Doing this would separate out hydrogen to then react with CO2 taken from seawater and create methanol.

Patterson believes that one of these farms alone could potentially produce 15,000 tons of methanol a year. This would be enough to fly a Boeing 737 airliner for over 300 round trips between Phoenix in Arizona and New York. Although, Professor of Civil and Environmental Engineering at Stanford University Mark Jacobson has reservations.

He argues that ‘some people think the only problem in the world is to reduce carbon dioxide, but that’s not the problem’. Jacobson also added that:

“Floating solar is a good idea, but just for producing electricity. With this fuel conversion, it’s a fuel that we don’t really need. There are a lot more efficient uses for a solar panel.”

The Future of Energy Efficiency

Working together to fight back against climate change is important. Whether we recycle or install our own solar farm, there are plenty of things that each of us can do.

At NP Solar we are committed to providing an alternative solution to the production of energy. If you would like more details about our projects or the work we do, please feel free to contact us.

This website uses cookies to improve your experience while you navigate through the website. Out of these, the cookies that are categorized as necessary are stored on your browser as they are essential for the working of basic functionalities of the website. We also use third-party cookies that help us analyze and understand how you use this website. These cookies will be stored in your browser only with your consent. You also have the option to opt-out of these cookies. But opting out of some of these cookies may affect your browsing experience.
Necessary Always Enabled
Necessary cookies are absolutely essential for the website to function properly. These cookies ensure basic functionalities and security features of the website, anonymously.
Functional
Functional cookies help to perform certain functionalities like sharing the content of the website on social media platforms, collect feedbacks, and other third-party features.
Performance
Performance cookies are used to understand and analyze the key performance indexes of the website which helps in delivering a better user experience for the visitors.
Analytics
Analytical cookies are used to understand how visitors interact with the website. These cookies help provide information on metrics the number of visitors, bounce rate, traffic source, etc.
Advertisement
Advertisement cookies are used to provide visitors with relevant ads and marketing campaigns. These cookies track visitors across websites and collect information to provide customized ads.
Others
Other uncategorized cookies are those that are being analyzed and have not been classified into a category as yet.
SAVE & ACCEPT